I am Denis Charles Woltemate. I was born in Wilmington, DE,  November 27, 1964 to Margaret(Peggy)Sheila Regan & Robert Henry Woltemate. My parents met while my father was stationed at Dover Air Force Base. After a brief marriage my parents divorced. My father went home to Detroit & then to Gatlinburg TN where he has lived since 1970. My mother went home to her parents Denis P. & Margaret A. Regan who primarily raised me. It was my grandfather who planted the seeds of lawn & grounds maintenance in me. My grandfather was everything to me as a child. He took me to school and picked me up. He spent time with me, took me to the park and at times took me to work with him. He was an immigrant from Ireland who spoke with an Irish accent. I can remember having to go see a speech therapist and hearing one of them tell us that part of the problem I had with developing my speech was because I spent so much time with my grandfather and his heavy accent. I mentioned that he took me to work with him at times. He worked at the DuPont Experimental Station for 42 years. He was not a PhD or a chemist. He was a foreman in charge of the janitors and cleaning crew. He also took, care of yards on the side and had a very nice yard himself. We spent a lot of quality time together but that would end when I was 11 years old. On July 6, 1976, my grandfather died of a short illness. I kind of became the man of the house.

Through my teenage years on top of taking care of my own yard I started taking care of some of my neighbors properties & still have some of those properties today. When it came time to go to high school, I went to Delcastle Vo Tech and had to choose a vocation course. I chose carpentry first, electrical second, and horticulture third. Carpentry and electrical were filled so I ended up in the horticulture class. Graduating in 1982, the foundation for my future occupation was being built. At the end of my junior year I got a phone call from school inquiring if I wanted to co-op or work during the summer and part time during my senior year. I was placed in a private estate in Centerville to work under the Head Groundskeeper, Glenn Phillips. Mr. Phillips would become my mentor teaching me all aspects of the grounds maintenance business. His son, Larry would also teach me about the business since he owned Phillips Lawn & Garden Care. I would learn to work on other properties. I had such a great learning experience that on the first day of school in my senior year, I asked my teacher, Gerry Abrams if I could take the tractor down to mow the football field. He asked me if I was feeling OK.

Through the 1980s while working for a number of flower shops during holidays such as Custie Straughn's Green Leaf Florist, House of Flowers & Edward F Lewis & Sons and working evenings at Dominos Pizza & overnights at Pathmark I slowly & steadily built a list of lawns & properties to maintain.

Through the 1990s we continued to grow having a couple friends of mine from Pathmark help me out with the ever growing list of customers. Calvin Eickmeyer, a Vietnam Vet, who was always loyal & Edward Hughart who is still with us today.

In 2021, our 40th year, we had the opportunity to acquire the remnants of my first employer, Phillips Lawn & Garden Care. Larry had passed away unexpectedly in 2015 & Glenn Phillips decided to retire at 84 !

Into the 21st century we continue to grow using the most up to date equipment, techniques & the most important ingredient, friendly & caring people to deliver the best service that we can.
We look forward to the opportunity to serve you.

Over 160 years ago my fathers family came to America from Germany and settled in what is now the Germantown section of Philadelphia. They started a florist, nursery and greenhouse business. Below is a small part of their story.

Bedding, Plants and Cut-Flower Work of all Kinds, No. 4646 Main Street, Germantown.-The florist trade of this city is one of the most active branches of business, and has been developed to proportions of the greatest magnitude through the spirit of enterprise and energy manifested by the leading members of the trade. Prominent among the most popular and representative concerns in this line is Woltemate's
Floral Establishment, No. 4646 Main Street, Germantown.  This business was originally established in 1848 by H. C. Woltemate, and since its inception at that date it has enjoyed a remarkably prosperous career. It is now  managed by Messrs. Albert and William Woltemate. They own seven extensive greenhouses, and usually handle an immense quantity of the choicest growths of cut flowers.  Their facilities are unexcelled, and they have the reputation  of having the best arrangements for promptly supplying flowers in the most unique and ornamental devices for balls, parties, receptions, weddings, funerals, etc. They also do an extensive trade in bedding plants, etc.  The growth and prosperity of this establishment is only commensurate  with the energy and enterprise of its proprietors. The policy upon which the business is conducted is
characterized by liberality, integrity, and the careful fostering of the interests of all patrons, so that transactions  once begun with this house may be made not only pleasant for the time being, but of such a nature that they will  become permanent and profitable.

H.C. Woltemate was my Great Great Great Grandfather. Albert & William were two of his three sons and they were my Great Great Uncles. The third son, Henry Christian Woltemate II opened a florist and greenhouse operation in the Mt Airy section of Philadelphia. This operation was in business till the early 1980s when the fourth generation closed the business. The Germantown operation closed in the early 1900s.
"It is our goal to be worthy of the compliments that were shared about  our ancestors so long ago" 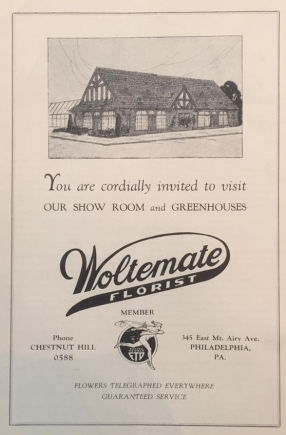